Ramsey Hockey Association is a non-profit organization that was founded to develop and promote youth hockey in the Borough of Ramsey and to support a competitive ice hockey program at the High School level.

Our mission includes encouraging, instructing, educating and developing moral character, sportsmanship, skill and prowess of participants and educating the residents of the Borough of Ramsey and surrounding communities about the sport of hockey.

Ramsey Hockey Association was established in 1997 by founding fathers Dan Mills, Brian Smith, Diane Tumulty, Jim Vint and Barry Donnelly to promote youth ice hockey in the community of Ramsey and to develop a high school ice hockey program.  Through RHA’s efforts, ice hockey found a home at Ramsey High School and has developed into one of the premiere sports programs in the state culminating in several league championships and a State Championship in 2009.  The foundation for Ramsey High School’s hockey program is RHA’s youth program which serves to develop the skills, sportsmanship and passion of our young hockey players that ultimately lead to the accomplishments attained by our High School’s teams.  Notable RHA alumni include Kyle Palmieri, 1st Round draft pick of the NHL Anaheim Ducks.

RHA fields house league youth teams from the Mite level (8U) through the Pee Wee level (12U) in addition to Middle School, Junior Varsity and Varsity teams.  RHA has also established an independent hockey program called the NJ Rams which provides participants with a higher level of skills development and competition.  RHA also administers the high school program in conjunction with Ramsey’s Board of Education and the high school staff. 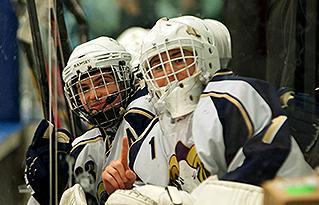