First, the landscape of youth hockey is different from other town sports. Communities generally have their own recreational and travel levels for sports such as baseball, soccer, football, etc.   However with hockey, most communities offer programs only at the recreational level.  There is a travel hockey option, but travel teams in hockey are fielded by separate independent organizations similar to select teams in other sports. This is because most communities do not have a publicly owned ice rink facility.  Accordingly, in order to field its own travel team, a community would need to obtain ice from a privately owned rink.  The caveat – these privately owned facilities either offer their own travel programs or already have long-standing commitments to other travel organizations.

Finally, a recent development in youth hockey has been the emergence of “independent” programs.  These programs are intended to bridge the gap between house league hockey and travel hockey.  Sometimes touted as “semi-travel” or “local travel”, these programs are similar to town travel programs for other sports and are designed to provide more hockey development than a house league program by offering more practices and games, but not as many as a full travel program.  Independent teams also do not participate in any of the USA Hockey sanctioned travel leagues – such as the USPHL, AYHL, or NJYHL – but play non-league games and participate in local house leagues.  RHA’s NJ Rams is an independent program.

RHA offers programs at the house league and independent levels. Below is a chart illustrating the different options for youth hockey and how these options correlate with other traditional youth sports: 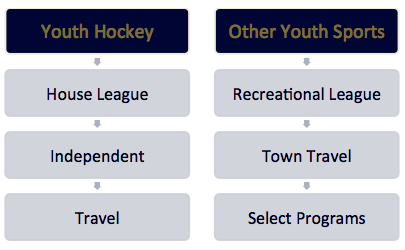